Monash University (Malaysia) - School of Information Technology is looking for Research Assistants and/or PhD potential candidates who are interested in this area:

Strong skills in C/C++ and/or Java with interests in Image Processing and Computer Vision. Bonus if experienced with OpenCV and image processing/computer vision algorithms, otherwise is a hardworking quick learner.

These are useful in biodiversity, animal conservation and environment protection efforts and form part of the emerging biodiversity informatics field.

For potential M.Phil/PhD candidates full scholarships are available (limited). Please sent your CV to me at loke.kar.seng@monash.edu for consideration.

You are most welcome to attend the following talk by Adrian Hoe, AdaStart Informatics. Details are as follow: 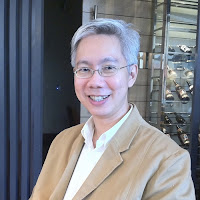 Mr. Hoe Boon You or better known as Adrian Hoe, is a software developer with over 20 years of experience in the software industry. Throughout these years, he has developed a wide range of specialties in programming languages (Ada, Objective-C, C/C++, Pascal, FORTRAN), analysis and design methodologies (Gane & Sarson, Chen’s Notation, UML), SDLC models (Waterfall, RAD, XP, Agile), operating systems (Mac OS X, Linux, Solaris), and databases MySQL, PostgreSQL, InterBase).
Adrian has come into contact with Ada programming back in the late 1980s. In 1995, he led his software development team, in a 3-year effort, to migrate to Ada. The use of Ada had then been their expertise in developing safety- and mission-critical applications. Later, Adrian submitted a conference paper regarding his experiences in Ada and was accepted and published in the 7th International Conference on Reliable Software Technologies, Ada-Europe 2002. Since then, he has been dedicatedly commending the adoption of Ada in industry as well as academia around South East Asia and East Asia (mainly Taiwan) regions.
In early 2002, Adrian was responsible to lead a research team in the R&D of hardware and software for government funded projects. He was instrumental in securing the IGS grant from Ministry of Science, Technology and the Environment Malaysia (MOSTE) for a military R&D, which is a collaborative project with STRIDE (Science and Technology Research Institute for Defense), Ministry of Defense Malaysia. In a separate project, he led his team to modernize a Navy application for the Royal Malaysian Navy.
As an experienced project manager in software development, Adrian has long exercised PSP (Personal Software Process) and TSP (Team Software Process) in his various software projects and has gained considerable insight into the benefits of PSP/TSP. The implementation of PSP/TSP had also helped Adrian and his team to achieve SEI CMMI Level 3 in their previous projects.
Since 2003, Adrian and his team have been actively collaborating with local and foreign universities on various interdisciplinary projects that involve computer science, business studies namely business analytics, electronic engineering, automation and information system. Adrian is currently an associate member of the British Computer Society. He also runs a software company named AdaStar Informatics. The company specializes in custom software development (for Mac OS X, Linux and Solaris), IT infrastructure convergence and web application development for mainly healthcare, manufacturing and retail industries.

Talk Abstract
Software development is not merely about turning concepts and designs into working solutions but an intricate process that needs to be measured, evaluated and improved. Software projects fail too often because developers fail to reasonably estimate the cost, time and effort involved. Studies have shown that over 50% of software projects are delivered significantly late and/or over budget, and more than 25% of them are axed before completion.
Defined software process, in particular, PSP, emphasizes process discipline, process measurement, estimating, planning and quality management. It aims to help software developers, engineers and professionals improve their personal software development process and produce quality work on schedule and within budget.
This talk gives an overview of PSP, the benefits of practicing PSP, the obstacles of practicing PSP and how to overcome them, using practical examples and valuable past experience of the speaker. 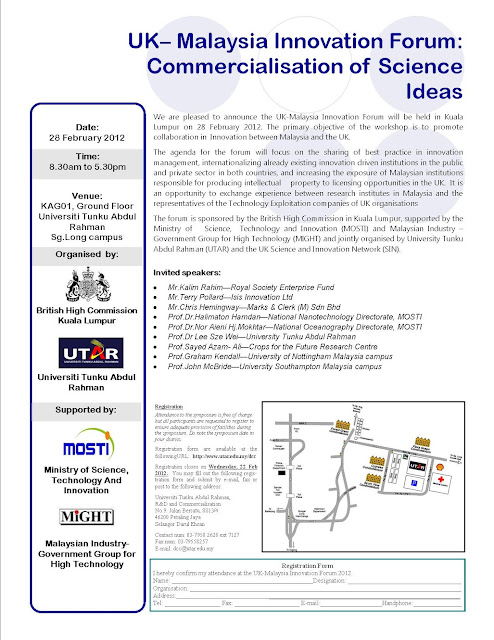 Together with British High Commission Kuala Lumpur, UTAR will be co-organizing the UK-Malaysia Innovation Forum on 28 Feb 2012.

The agenda for the forum will focus on the sharing of best practice in innovation management, internationalizing already existing innovation driven institutions in the public and private sector in both countries, and increasing the exposure of Malaysian institutions responsible for producing intellectual property to licensing opportunities in the UK.  It is an opportunity to exchange experience between research institutes in Malaysia and the representatives of the Technology Exploitation companies of UK organisations
The forum is sponsored by the British High Commission in Kuala Lumpur, supported by the Ministry of  Science,  Technology and Innovation (MOSTI) and Malaysian Industry  Government Group for High Technology (MIGHT) and jointly organised by University Tunku Abdul Rahman (UTAR) and the UK Science and Innovation Network (SIN).

RA Wanted: Android-based Application for ITS

To involve in developing software development of an innovative application on Android platform for Intelligent Transportation Systems.

If you are interested in the RA position advertised above, please email your CV directly to Dr. Tay Yong Haur (tayyh@utar.edu.my) as soon as possible. Feel free to write to Dr Tay for any further inquiry of the project.
Only short-listed candidates will be called for interview.
Posted by YH Tay at 2/10/2012 05:10:00 PM 0 comments

Computer vision algorithm and software development for the application of urban traffic monitoring.

To involve in the software development and continuous algorithm improvement of a computer vision-based software product for urban traffic monitoring.

If you are interested in the RA position advertised above, please email your CV directly to Dr. Tay Yong Haur (tayyh@utar.edu.my) as soon as possible. Feel free to write to Dr Tay for any further enquiry of the project.
Only short-listed candidates will be called for interview.

IEEE Conference on Sustainable Utilization and Development in Engineering and Technology (STUDENT 2012) will be held at Kuala Lumpur from 6-9 October 2012.
Deadline for paper submission is: 15 April 2012.
Further details, please visit the official website at: http://www.utar.edu.my/student2012/ 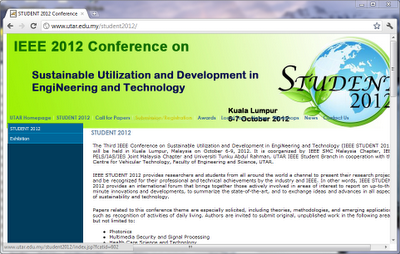 Enjoyed your AI class with Sebastian Thrun and Peter Norvig? Here are another two follow-up online lectures from Prof Sebastian Thrun. In 7 weeks, you will learn to build a search engine, or to program a robotic car!
Watch the two videos below and sign up here: http://www.udacity.com/